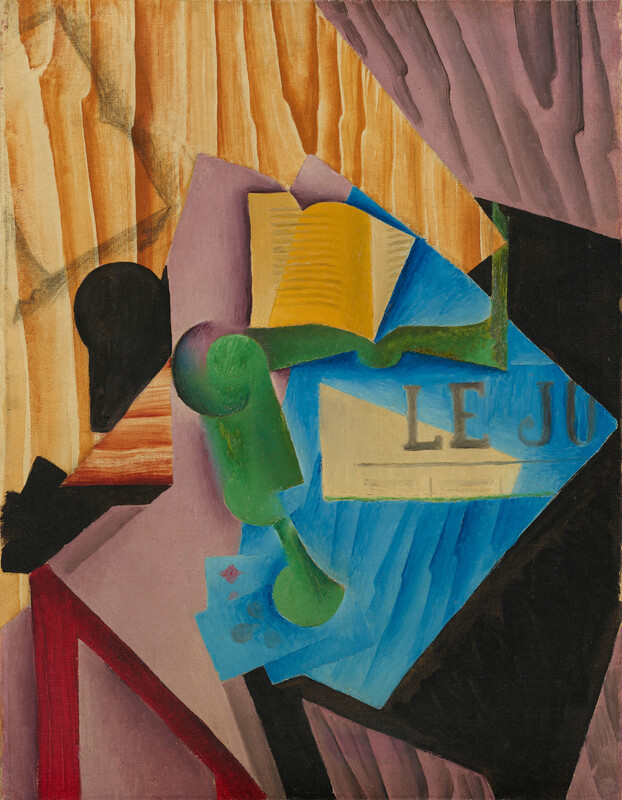 《Journal and the Open Book》

Juan Gris, who original name was José Victoriano González Pérez, studied art in Madrid before moving to Paris in 1906 and settling in the Bateau-Lavoir, where he met a fellow Spaniard, Picasso. In 1908, through Picasso, he became acquainted with Georges Braque, Guillaume Apollinaire, André Salmon, and Max Jacob. Picasso and Braque had, between 1909 and 1911, promoted Analytical Cubism, breaking down subjects to fundamental forms and reconstructing them geometrically. As the analysis and deconstruction advanced, it became difficult to distinguish what was being depicted. Gris had lived in the Bateau-Lavoir since 1906 but did not begin to produce Cubist paintings until 1911. He had looked cooly at the work of Picasso and Braque, explored the issues and possibilities they raised, and started seeing a new direction for Cubism. Leaving Analytical Cubism, he attempted, with Picasso and Braque, to resynthesize the elements of space, form, and color, which had been pursued separately, and synthesize the subjects of their quest for deconstructed abstract, plastic significance. That new venture is known as Synthetic Cubism. In this example, the starting point is not objective reality but something that has emerged from the artist’s creativity. This work by Gris dates from the Synthetic Cubist period, late 1912 to 1914. Using papier collé and trompe l’oeil, he has created this painting as a re-construction of reality.
Share this page
Collection Highlights
Search
Search by keyword
Search by name of artist
Artists’ names (alphabetical order)